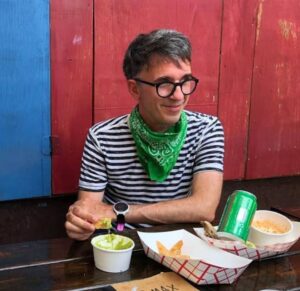 I’m a medievalist who works on animals and posthumanism. I’m a professor of English literature at Brooklyn College and the Graduate Center, CUNY. My books are How to Make a Human: Animals and Violence in the Middle Ages (Ohio State University Press, 2011), which the press has made freely available for download here; and the follow-up, How Not to Make a Human: Pets, Feral Children, Worms, Sky Burial, Oysters (University of Minnesota Press, 2019).

My current book project, The Irrational Animal, aims to reassert the importance of the concept of reason to a time prior to the so-called Age of Reason; to historicize the concept of reason by distinguishing it both from modern uses of the terms and within the Middle Ages itself, which had its own varied rationalist traditions; and to excavate the medieval foundations of modern prejudices underlying not only our modern use of terms of “reason” and “rational,” but also of free will and therefore of freedom itself, all of which rely upon generally unquestioned distinctions between reason and irrationality.

I have also published on medieval vegetarianism, the white supremacist fascination with Vikings, and Shakespeare’s animals, among other related topics. I’ve published most recently on wolf-hunting and the utility of knights in Piers Plowman for the Yearbook of Langland Studies. For a sample of my scholarship, see here. For a sense of my teaching, see the 63 videos (and counting) of short lectures I’ve made for my undergraduates.

My CV. I’m on Mastodon at https://karlspace.masto.host/@karlsteel. I’m also on Twitter while Twitter remains: @karlsteel. You can contact me via ksteel at brooklyn dot cuny dot edu