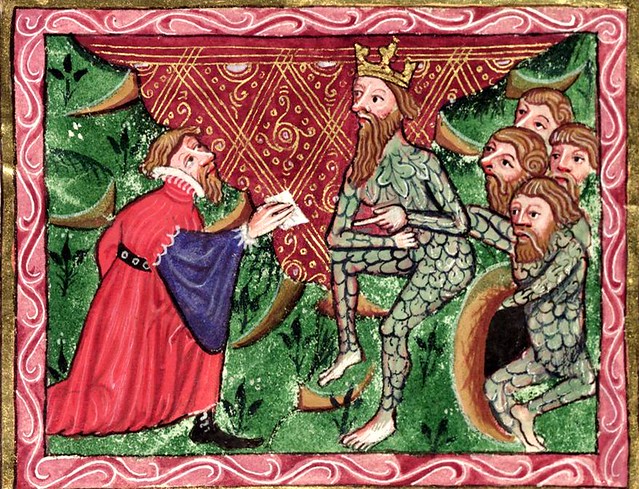 Right now, I’m grading a set of papers on the encounter between Alexander and Dindimus. This episode sees Alexander charge Dindimus and the Brahmins with smugness, self-delusion, and pride. Of course you’re chaste, he argues: you’re all ugly! There’s no more virtue in your contempt for goods than there is in a blind man not being led astray by lust of the eyes! And anyone who rejects the gifts of God by not eating meat is clearly someone who thinks himself to be better than God! Dindimus counters with all the standard ascetic philosophy anyone familiar with medieval texts would expect. All that really distinguishes him is his refusal to wound the earth: as I argue elsewhere, this is a general extension of ethical significance to anything, with all the virtuous squalor that necessarily follows.

My students persist in reading Alexander and Dindimus as though they’re characters, with motivations, secret agendas, and so forth. My usual approach is to argue that these aren’t characters; they’re words on a page, and just there to let the text do something, however incoherent or contradictory that might be. In this case, we have two ideas — the active warrior life and the philosophical life — given the names “Alexander” and “Dindimus” and then we just watch them go at each other. Don’t worry about them as if they’re people!

But I’ve just now sort of changed my mind. Yes, Alexander and Dindimus are ideas, primarily, but they’re also vulnerable bodies. Alexander threatens to behead Dindimus (Dindimus says, fine, I’ll just ascend to the stars, where I was going anyway). Dindimus lives in and on the earth, and neither he nor his people mourn if they outlive their children. And we know Alexander will die young.

It is, as I just wrote on a student’s paper, that the texts know that ideas need bodies to propagate. They know there’s no such thing as a disembodied idea, a pure philosophical proposition, or a point that’s not being made for the sake of some body here and now. The debate’s frequent reminders of vulnerability, then, are also a reminder to us not to forget the world and the bodies that make, remake, and sustain philosophy.