Grammar, personified, can be perfectly innocuous, bearing nothing but a wax tablet, as she does in twelfth-century illustrations for what is probably either The Marriage of Mercury and Philology or The Consolation of Philosophy: see the image to the right, for example, or, from the same manuscript, here, or this illustration from a fifteenth-century Boethius. Writing is just what she does, and whatever the difficulties we might encounter in learning how to do it, none are apparent in her placid face or her accoutrements. Yet many medievalists will also know the famous Grammar on the West Facade of Chartres Cathedral, who looms over her young charges with her ferule; underneath her are Donatus or Priscian, backed up by the authority of classroom corporeal punishment. None of the facade’s other seven liberal arts carry a weapon; Music is ringing bells, for example (note: I need to check this more carefully!). Learning to write, the facade says, is difficult, unpleasant, an invitation to pain. 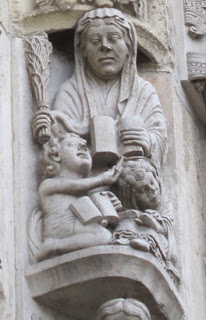 Which is why it’s surprising to find such a focus on pleasure in Geoffrey of Vinsauf’s Poetria Nova and Matthew of Vendôme’s Ars Versificatoria: whatever their differences–and the Ars merits its reputation for tedium. while Geoffrey’s perhaps merits its enormous popularity–each work aims to teach writing primarily to ward off boredom, disgust, and creeping feelings of dissonance. Or, to put this another way, each aims to create equilibrium and harmony, to increase our pleasure in reading.

Those of us who teach English Composition may be surprised at this goal: I do, and I certainly was. As I understand it, training in writing in the twenty-first century American college classroom tends to focus on grammatical rules, not to preserve or increase the pleasure of the reader, but for clarity of expression, and, especially, to serve as a sign that the writer has been credentialed. The college-educated writer knows the rules of commas and semi-colons in English, and can at least the fake the manner of being to the manor born by spelling each word correctly. Arguments are the other thing we teach: students have to have something to say, and have to know how to get that across. We want them to learn to think, to make an intervention, to join an existing conversation. And we want them to abandon the habits they acquired in earlier, bad teaching: the standard, pointless openings — the dictionary definition, the inverted triangle, and so on. If pleasure has anything to do with this approach to teaching, I don’t know where it is.

But in the twelfth and thirteenth centuries, pleasure was all! On metaphor, Geoffrey writes “When you transpose a word whose literal meaning is proper to man, it affords greater pleasure, since it comes from what is your own” (44). Later, on transposition, he observes “When meaning comes clad in such apparel, the sound of words is pleasant to the happy ear, and delight in what is unusual stimulates the mind” (50). On metonymic expressions of cause, “There is greater pleasure and satisfaction for the ear when I attribute to the cause what the effect claims as its own” (51). In warning against “ineffective” word use, Matthew of Vendôme speaks of “suitable” repetition, which “is formed in three ways: for the purpose of an addition, for the purpose of clarification, and for the purpose of greater expressiveness” (95): the first two options are practical, the kind of advice that one might encounter in the tens of thousands of English 1010 classes currently being run right now; the last, though a woolly and uncertain thing, points to the pleasure of being overwhelmed, a little, by what one reads. The so-called “reversible” metaphor, the antistrophe, has, Matthew explains, “a singular pre-eminance among the other tropes, and should be used especially by verse-makers: for it adopts a special beauty to the metrical arrangement”  (86). Or — one more example — Matthew likens effective versification to a bejeweled object:

there are some expressions which are, as it were, substitutes for jewels; from skillful positioning of these the whole meter will seem to be celebrating. For multiform ornamentation of them imparts by positioning the benefit of its beauty to other expressions, and by association, as it were, applies the attractiveness of a certain festive character. (64)

Each writer dedicates themselves to teaching the avoidance of fault. Grammar is taught elsewhere, whereas Geoffrey and Matthew are interested in vocabulary, the arrangement of words and clauses, and, above all, elegance and harmony. In their examples, we encounter a certain social harmony, where the young women who so often serve as objects to illustrate character, are at once the objects of desire and paragons of demureness. Matthew’s disdain for enslaved people, inherited from a Roman slavocacy, further attests to the cruelties and exclusions of the fantasy of social harmony. Men have to be men; matrons have to be wise; the old cannot love, and the young must be full of energy. The avoidance of grammatical fault is the avoidance of social fault. I am reminded, necessarily, of Marcos Gonsalez’s writing about racism and English composition, for example, “When ‘Good Writing’ Means ‘White Writing’”.

Gonsalez writes about the ignorance of his colleagues, and their largely unconscious subjugation of their students to grammar’s ferrule:

In their radically liberal and progressive and student-centered pedagogies [phrases, I should emphasize, Gonsalez is using with merited disdain –ks], the students are the ones who have to adapt, to change according to a professor’s shifting standards. The underlying assumption beneath my colleague’s question is that my student’s use of language, with their specific ways of speaking, writing, knowing, and experiencing the world, is not of the university and the writing classroom. This implies to students that their everyday speech and their everyday forms of composing the written word is not intellectual, is not appropriate for sharing with others on the page. The words in Spanglish, the humorous inversions of logic at the end of a thought, the hard accent and emphases of a student born and raised in the South Bronx, the means of interpreting the world unique to their kind of body and their bodily history, is deemed not good enough.

Yet there’s something to be said, still, in favor of Geoffrey and Matthew’s dedication to the pleasure of reading and writing. They don’t really want to rock the boat, of course; they don’t see writing as a kind of thinking, and they certainly don’t see thinking as a form of social transformation. But then again, the same holds true for most instruction in writing, even now, which, as Gonsalez argues, is so poorly fitted to drawing out the artistry and actual experience of our students’ lives. What happens to writing instruction when we put pleasure at the center? And what happens when we find in Geoffrey and Matthew that wellspring of pleasure — surprise, excess — which introduces a certain thrilling disharmony into the smoothness of a rhetorical order that rests on the deadly harmonies of the existing social order?