Nearly every year, I teach an MA course at Brooklyn College whose unofficial title might as well be “Literary Theory for High School Teachers.” Late last semester, during a review session, I wrote the work SELFIE on the board and demanded QUICK GIVE ME A MARXIST READING.

And the class came through brilliantly, producing the exact ‘self(ie) is a fetish, secondary to the technological apparatus, such that the self is the apparatus of the technology’ etc etc interpretation I wanted, moving the standard misogynist critique of the selfie into a wholesale critique of the liberal humanist subject.1

I swear to you that all that was on my mind yesterday, at Kara Walker’s “A Subtlety,” a selfie factory if ever there was one. You’ve seen pictures of the sugar sphinx, and if you were able to go, you no doubt saw what I did: people–the same kind of jackasses who take pictures of themselves ‘holding up’ the Tower of Pisa–arranging their hands to mime cupping the sphinx’s nipples.2  At The Root, Yesha Callahan provides the definitive critique:

History has shown us time and time again how a black woman’s body was (and sometimes still is) objectified. From the days of the slave trade to even having black butts on display in music videos, the black woman’s body seems to easily garner laughs and mockery, even if it’s made out of sugar.

Cait Munro at artnet.news joins in, and calls the photos representative of the “intellectual lowest common denominator,” “infantile,” and “lighthearted.”

And that’s all true, but.

If the selfie and its little brother — the stupid portrait — are the best representatives of the self-as-fetish, then the sexualized joking with the Sphinx is this fetish self intensified, denying this self’s entanglement in the long history of racism, sugar extraction, and, especially, those things we often think of as most privately ours, our palate and our sexual tastes. The joke’s on them, then, because these stupid selfies are just public confessions of that self’s being little but an apparatus for perpetuating injustice, even when that self thinks it’s just having fun. With that, these jackasses become the missing element of the sculpture to demonstrate, for all of us, why it’s there at all. And so on.

The joke’s on them for a couple more reasons. First, Kara Walker’s work is often, even primarily, about the suppurating sexual, racialized violence in the guts of America. See “Burning African Village Play Set with Big House and Lynching” at the Brooklyn Museum, for example, or this image below, from a show at Sikkema and Jenkins last May that, I’ll hazard, most of the Walker selfie-takers didn’t bother to seek out:

The joke’s on them, then, because they’re just rubes who don’t know art. 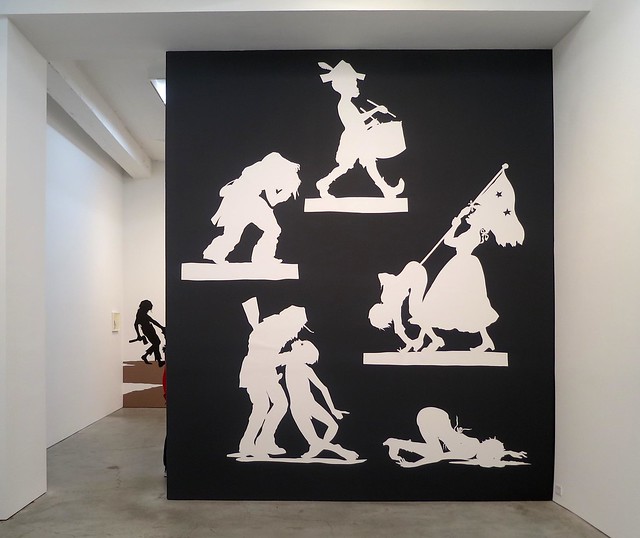 To reframe the point I just made: these jackasses just showing themselves as the kind of people who don’t go to see art all that often and, especially, as the kind of people who don’t know Kara Walker’s work well enough to know the sphinx tempts the crowd to contribute to making exactly the kind of work Walker normally does. Jack. ass. es. Had they been more familiar with her work, they’d know that by pretending to pinch the sphinx’s nipples or to stick their tongues in her vagina, by pretending, in short, to assault this defenseless yet gigantic woman, they’re just behaving like the creeps and racists that rampage through Walker’s work. They complete Walker’s Sphinx, because without that assault, we don’t have the kind of art that Walker normally makes. edit – what I mean to say here, because I want to make this as clear as possible, is that Walker, by design, has ensured that many of the visitors would make themselves living examples of exactly the kind of pervasive racism that her work rightly excoriates.

Obviously I can’t leave that there. My not taking my portrait with the sculpture is my way to demonstrate that I’m better. than. all. this. It’s a way to declare my sophistication as a consumer of art, my disgust at these people for their racist insensitivity and for their stupidity about art, and, you know, my good wishes for racial justice.

It’s a way to let everyone know that I read Bitter Sugar as an undergrad. It was assigned, but, reader, I read it, and I want to let you know that it moved me: it’s probably about then that I stopped drinking anything but the kind of soda sold at food co-ops, which should count for something! And, in 2000, I had a friend who, during the Domino Sugar strike, had her toe broken when a truck loading scabs into the factory rolled over it. From a distance, while in a medieval lit seminar at Columbia, I thought she was very brave! Very brave indeed! And so on, on to supercilious so on.

All of this is to say that I’m not off the hook. My supposedly personal refusal to complete the sculpture, my dedication to treating it primarily or even only as a massive, aesthetic object, also wraps me up on the racist history and the racist present Walker’s condemning. I’m the good liberal, the Art Fan, even the Fan of Walker, who has to know, now, that the only way out is to do more than the good liberal subject should.

1 I have in mind this pithy formation from Christopher Wise, “Saying ‘Yes’ to Africa: Jacques Derrida’s Specters of Marx,” Research in African Literatures 33 (2002), 130 [124-42]: “To understand the subject’s objective construction (i.e., how I became an ‘I’), I need only reverse the process, enabling me to realize that the autonomy of my subjective identity may be illusory. The seeming autonomy of the subject, sealed off from the world of objects, occurs in part because the object that I myself once created projects an illusory independence upon the subject. I only feel myself to be an autonomous and independent agent.” Thanks Chris for introducing me to literary theory! ↩

2 And you maybe saw what Jamileh King did, writing at Colorlines, “an audience that’s mostly white.” Which is true, absolutely true, but without taking anything away from King’s important article, I also want to register that I saw a lot more black women at the show than I typically see at any given NYC high culture event. That was at once heartening and also, of course, a depressing reminder of the presumptive whiteness of American “high culture.”↩