This semester is my first time teaching the Canterbury Tales to doctoral students. To rise to their level, I decided manuscripts would be a big part of my teaching: after all, as digitization is much advanced since I myself was getting a PhD [mumble] years ago, manuscripts can, and probably should, now be a key focus to medievalist graduate training anywhere, even in the hinterlands of Manhattan.

Apart from the expected Ellesmere and Hengwrt manuscripts, and the useful tools at the Norman Blake Editions of several key CT manuscripts and, as well, Manly and Rickert, here’s what’s undoubtedly a partial list of fully digitized Canterbury Tales manuscripts, or, at least, the ones I’ve found easiest to navigate:

If you’re reading this, I trust you’re already familiar with manuscript variance with the Cook’s Tale or the variously omitted stanzas from the Envoy to the Clerk’s Tale (or the omission of the Envoy altogether). I trust you’ll want less famous examples, maybe to help you through this term, or to get you started on the next.

What varies most, perhaps, is the manuscript apparatus, like section headings and divisions, which give us a sense of how this work might have been read and sorted. For example:

This is the Knight’s Tale. How do the pieces fit together? Where the Riverside has “Explicit secunda pars / Sequitur pars tertia,” and where Hengwrt 25v has “Explicit prima pars / Incipit pars secunda,” Christ Church 152, 26v, has “the ordinannce of lystys that thesyiis ordaynyd.” Does the Knight’s Tale comprise abstract parts of equal weight, or is it a sequence of events? If so, whose doings are worthy of “ordaining” the divisions of the plot?

Or here’s the Reeve’s Prologue in Corpus Christi College ms 198, 54v. Our medieval scribe has started the tale at the prologue itself (“Explicit fabula molendmain [the Miller] / here bygynneþ þe Reeues tale” — note the mixture of Latin (Explicit) and English (bygynneþ)); an early modern reader intervenes, and writes “Prologue” in the margins. Are they comparing manuscripts? Or is it a sign of an independent interpretation?

When does the Wife of Bath’s Tale start? In at least one case, her tale – or one of them anyway – begins after the Pardoner interrupts her:

Here, then, the Wife’s prologue is split between a prologue, where she does scriptural interpretation, and a tale, where she finally begins to tell us something of her “experience.”

Most interesting to me, however, is what the manuscripts call what the Friar does at the end of the Wife’s Prologue, or first Tale, or whatever else it might be called. Here’s my (crowded) slide: 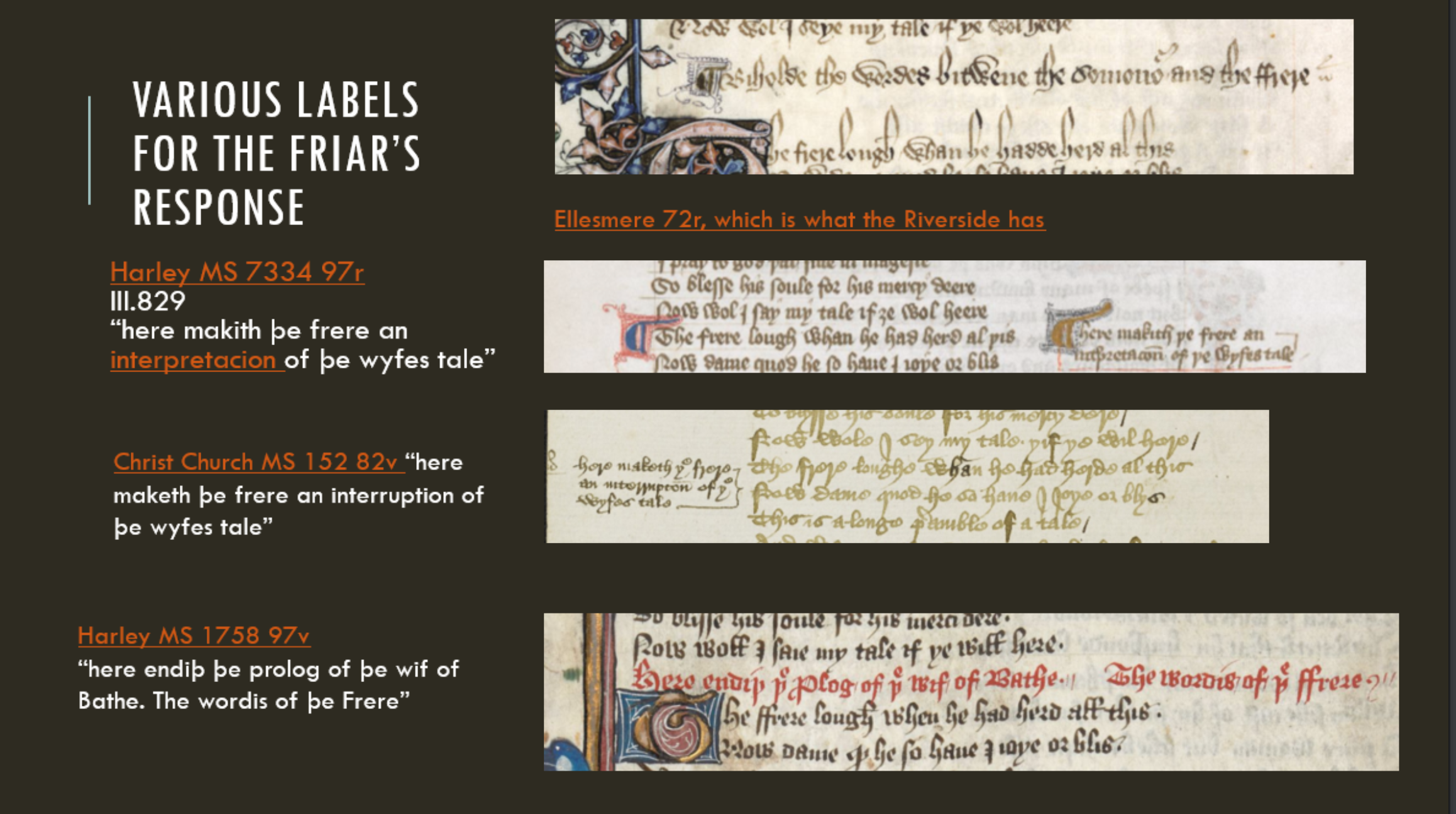 Is it just “words between” the Friar and Summoner? It is an “interpretation” of the Wife’s tale? An “interruption”? Or is it just a neutral ending of the Wife’s prologue, and the words of the Friar, following neatly? It depends! And a lot depends on it.

As we all know, in their capacity for nuanced forms of emphasis, manuscripts are closer than print is to speech. We on the other side of Gutenberg have generally lost rubrication, marginalia too, or underlining, manicules, and slight enlargements, like so, from the Friar’s Tale:

Should the carter be taken down to hell? “Nay q[uo]d þe deuel,” he absolutely should not.

Finally, a bit on early modern readers of Chaucer. Griselda’s story is a marriage story, after a fashion, which perhaps helped suit this blank space for an early modern family record:

The Fox children crowd in over the course of the sixteenth century, here and on the next page, before the Franklin’s Tale — not the Merchant’s — begins.

And this, a record of what one early modern reader cared most about:

Cambridge Trinity R.3.3 38r gives us an early modern reader who, like many of us, is curious about the rest of the Squire’s Tale. They’ve clearly “sought in diuers places” for the “the reaste” but found nothing except the final two lines about Apollo, just like you have in your Riverside.

More interesting is what doesn’t get changed: in red, “The Prologue to the Merchaunt.” Turn the page, and we have the words of the Franklin to the Squire, but here assigned to the Merchant, and then the Merchant’s Tale (“Whilom there was dwelling in Lombardy / A worthy knight”). No correction. No correction. No indication of difference, despite our reader likely having encountered the Franklin and his tale in these passages as they hunted in diverse places. Here at least is one reader who wasn’t bothered by variance in Tale order. If you’re having your students read Arthur Bahr, this is as good illustration as any of ways to think the Canterbury Tales as other than “fragments.”