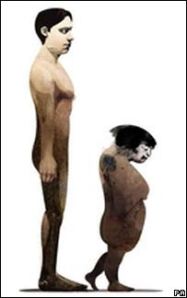 A few quick spurs to conversation, as that’s all I have in me right now. Spurs, that is.

Get ready! You may have run across a recent assertion by Oliver Curry of the London School of Economics that some 100,000 years from now the human species will diverge into two species: one tawny-hued, beautiful so long as you go in for the standards of Western fashion magazines, tall, and deep-voiced (if men); the other will be squat, hairy, unhealthy, and, like Mike Tyson, will possess unnervingly squeaky voices. The taller people will have tenure; the squat people will be happy to grade unending piles of ungrammatical personal essays about shopping and whatever is the future’s equivalent of beer bonging. You get the picture.

I thank the scientists for kneecapping Curry’s hypothesis so quickly, but I wonder if Curry would even have proposed his fantastical future had he listened to the medievalists. Why not throw ourselves in the breach? Those of us who know our chivalric narrative or Paul Freedman are all too familiar with long-limbed, barrel-chested, flaxen- haired Adonises whose bodies incarnate the justness of their rule over peasants whose bodies, by contrast, more often than not hideously burst at the seams with animal features. Granted, some of these beautiful men were huge and green (SGGHulk? G. C., can you read me?), and some of the squat untermenschen were actually, well, also quite large:

Now I may be selling our profession a bit short here, but it seems we can do at least this: if a medievalist had mapped out the familiar discursive boundaries for Curry by loading him down with Yvain and Aucassin et Nicolette and, why not, The Time Machine, Curry might have kept his ideas at the pub, where they belonged. My students this semester, may they be touched by his noodly appendage, have often been stopped short by the idea that Homer and Chaucer–or the Franklin–simply didn’t make up the stories they told. The plots might not be only theirs, but the words are, mostly, so that’s where we apply our critical pressure. I’ve eased them out of their convictions of the supreme value of originality by pairing Homer with Virgil and Virgil with the Eneas and the Franklin with Marie de France and letting them know that similar narratives reward similar heuristics. And, by the end of semester, they’ll at least know how to cow some of these standard narratives with suspicious looks and, I trust, proper comma usage. Would that Curry had also taken my class!

I was urged to this post, in part, by reading Michael Calabrese’s Performing the Prioress: ‘Conscience’ and Responsibility in Studies of Chaucer’s Prioress’s Tale. While I can’t offer any kind of detailed critique–I skimmed the article today right before teaching the Prioress in the hopes of jarring my pedagogy in a different direction–I can say that it intersected nicely with some of the longstanding debates about ethics we’ve had on this blog. You might want to read it yourself, but now, for your debating pleasure, I quote:

In this complex, volatile context of edu-business, medievalists must monitor their ethical projects in relation to the evolving curricular imperatives that are redefining the university’s relationship to twenty-first-century culture. As we negotiate this relationship we should consider, ultimately, an Arnoldian disinterestedness from contemporary issues of race, class, and gender for fear that if we too closely link the medieval and the modern in relation to these politics, we will be packaging our profession for the architects of the corporate university who will have figured out, finally, what it is that “we do” and will blithely assimilate it to the university of excellence, an institution interested in producing students just politically sensitive enough to facilitate the smooth operation of global capitalism as it forges its “solutions for a small planet.

Similarly:
To study hatreds, violences, and injustices with the announced purpose of creating a “positive response” to a world that licenses “repression and violence” is to conduct a politics of affect, dangerous not so much in its utopianism as in its re-definition of literary studies, a redefinition that the corporate university of the twenty-first century, operating like a state-run HMO, will happily assimilate into its own economic and social ends. A humanities that displays civic utility is, as Plato remarked long ago, good for the state. Yet where many critics today see Plato to be a utopian and even (as Bertrand Russell saw him) a fascist, these same critics do not see the dangers to academic freedom that political criticism can spawn.

Surely my critical machine isn’t helping the fascists by stopping future Curries in their tracks. Narrative analysis never hurt anyone, but it seems, maybe, there’s a danger in doing too much ethical performance and directed dislodging of prejudices. Thoughts?