Back in America! If you read Minima Moralia before watching Captain America Winter Soldier Word Word on the flight, an essay drafts itself

Captain America: The Winter Soldier is a live-action Hollywoodized adaptation of Minima Moralia. You’ll remember MM for its discovery of fascism in every aspect of the postwar liberal state. In running for the bus; in the discovery of Mammoths; in advertisements for toothpaste; in the mania for holiday snapshots; in, more obviously, standing in line and in the “teachers leave that kid alone” violence of the schoolroom:

From the domestic servants and governesses tormenting upper-class children to show them what life is like, by way of the teachers from Westerwald extirpating in them, along with the use of foreign words [elsewhere: “German words of foreign derivation are the Jews of language”], all joy in language, and then the officials and employees leaving them to stand in queues, the non-commissioned officers treading on them, there is a straight line to Gestapo torturers and the bureaucrats of the gas-chambers.

Or in Human Resources or in “networking,” in the business or conference-going sense:

For the so-called man of affairs with interests to pursue, plans to realize, the people he comes into contact with are metamorphosed automatically into friends or enemies….This way of reacting…the pattern of all administration and “personnel policy,” tends of its own accord, and in advance of any education of the political will or commitment to exclusive programs, towards Fascism.

Adorno’s genius is to replace the Jew with the Fascist. For anti-Semites, Jews are the secret contagion infesting the people. The anti-Semite believes that if only the Jews could be extirpated, then the people, capitalism, the culture, etc., would thrive. As a result, he turns up Jewishness wherever he looks, not because it’s “really” there, but because nothing ever works perfectly. If, for the anti-Semite, the fault is Jews, and if fault is actually universal, then Jews are everywhere, and the task of extirpation and paranoia can never stop.

Adorno swaps in the fascist for the anti-semitic fantasy of the Jew, although–by contrast!–with just cause: the fascist praise of masculine hardness, of purity, of submitting to historical (and by extension racial or genetic) necessity, of having a good head for business, all these have real, nasty effects that really do permeate and structure all dominant society. Still, Adorno, for better or worse, replicates the same paranoiac intensity cultivated by the anti-Semite. Frankfurt style cultural critique needs to believe in the secret.

The Captain America sequel (hencefore CATWS), which I watched on the plane a couple days ago on the way back from Iceland, does the same thing. Or, since I was reading Minima Moralia as the plane climbed, that’s how I saw it.

Like most modern Action films, CATWS discovers that the “call is coming from inside the house”: the enemy is within the organization, or perhaps it’s the organization itself. See the Bourne movies, or Mission Impossible, or Iron Man. So, when CATWS’s directors present the film as a modernized version of a 70s political thriller, even going so far as to use Three Days of the Condor’s Robert Redford, CATWS is really just another witness that the 70s political thriller is the modern narrative, but purged of that genre’s pessimism. Because its hero lives, the modern thriller holds out an apocalyptic hope that the inner contagion can be cured, but without any fundamental revision of the system.

Needless to say, this is a liberal rather than revolutionary fantasy.

CATWS’s key difference from other modern thrillers, though, is that its inner villains are Nazis. Specifically, they’re agents of Hydra, an offshoot of the Nazis whose superior technology and sneakiness helped them survive the war, with a bit of help from the US’s real-life “Operation Paperclip.” Unlike the Nazis, Hydra is sly. No Nuremberg rallies for them. No big salute. They’re whisperers, leaning in close across the decades to sneak a “hail Hydra” into their allies’ ears.

Arnim Zola, the brain of Hydra, copied his brain into an analogue computer in the early 70s. When he’s confronted in a secret camp in New Jersey (of course?), stashed (of course) in an abandoned US military training camp, he explains that all world chaos since WWII can be blamed on Hydra. Images flash across the screen, recalling the great psychological screening scene of The Parallax View (for more from me on that, see here). Hydra’s aim? To sow enough chaos that the people will accept fascism. They’re now on the verge of using everyone’s data – bank records, Facebook posts, Instagrams, school records – to identify fascism’s current and future opponents, and then to kill them, quickly, by the millions, to inaugurate a New World Order, now without any possible opponents. Of course, it’s up to Captain America to stop them.

And he does, saving capitalism and the American way by eliminating its secret contagion.  The Black Widow uploads all of SHIELD and Hydra’s secrets to the internet (“it’s trending!” she exults), including her own nasty past as KGB assassin, eliminating the privacy through which the secret fascists operate. We’re now in a world without secrets, or nearly so. In the film’s last few minutes, Nick Fury and the Black Widow sneak back into the extrajudicial shadows, SHIELD’s former agents go to work for the FBI and CIA, and, especially, as we see in the credits teaser, Hydra persists. We’re back at the beginning, then, still in the hope that things might work, still in the liberal realpolitik certainty that contagion continues and that it can be cured only through the deployment of the liberal order’s own autoimmune secret contagion, here called the “super hero.”

The only way out of this loop might be for Captain America to shrug his shoulders, look at the camera, tell us “shit is fucked up and shit,” and, you know, continue saving people, but without any certainty that what he’s doing is right. 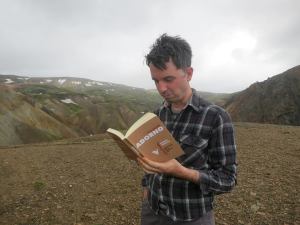 Pause near the top of Brennisteinsalda