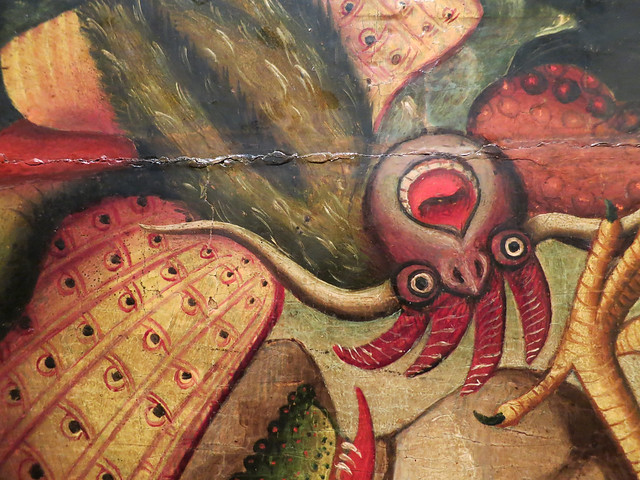 Important conversations on what we do as literary critics continue below, but as today’s Halloween, we ought to take some time to scare ourselves. Here are a few of my favorite spooky medieval tales. I’ve occasionally mentioned the medieval story of the transvestite zombie (a variation of the Marina legend?):

The evil one envied a religious man who applied himself assiduously to hospitality along with his other pious works. Dreaming up a novel sort of malice, the evil one occupied the corpse of an unfortunate woman who had died without confession and viaticum. Dressed as a man, he entered the monk’s cell, and accepted for an annual wage the necessary service of receiving guests. For a while he showed himself diligent, quick, and ready, seeking an opportunity to upset him with the malign sting of carnal desires.

But divine loving-kindness was ahead of his cunning. A holy bishop endowed with a prophetic spirit arrived to visit his parishes. Observing the hired servant at work, he perceived the hidden intent of the evil spirit. In private he anxiously asked his host who he was and where he came from. When the monk responded openly and unsuspectingly, the priest began to ask whether he ever saw him enter the oratory or participate in the divine mysteries. He answered that, when he himself arose for vigils, the man remained asleep outside with the rest of the seculars, but beyond this he had noticed nothing. The bishop called the man, and commanded him by authority of the divine name and of his episcopal office to tell who he was, what he was called, and why he came. But, gnashing his teeth and melting away, he replied, ‘Truly, is what concerns you so well finished–or neglected–that you have to come to inquire about my affairs, which are none of your business? If you had delayed your prying visit a few days, I would have gotten what I came for.’

But, O great power of the divine name, and episcopal authority, so effective against us! At the bishop’s command this creation of diabolical fraud vanished, and the corpse fell into dust and dry bones.

(from Geoffrey of Auxerre, On the Apocalypse, from a series of reanimation, golem, and fairy stories, all seemingly inspired by his horror at women priests)

A demon singer walks among us!

Cesarius tellis of a clark that som tyme had a swete voyce, to so mekull that men at hard hym syng thoght that it was a grete delite to here hym. So on a day a religious man happend to here hym harpe, and onone as he harde hym he sayd in this maner of wyse; “This voyce & this melodie is not of a man bod, rather of the devull.” And all men mervayld of this at he said, & evyn furthwith he co[n]iuryd hym; & the fend onone went his way, & lefte the bodie as a dead, dry caryon; & so thai mott wit at it was a dry caryon.

And here’s the Latin from Caesarius of Heisterbach: I have to say I much prefer “cadavere mox corruente ac foetente” to “lefte the bodie as a dead, dry caryon,” not only because it’s more repulsive, but also because it reminds me of “And alle the blee of his body was blakke as þe moldes / As roten as þe rottok þat rises in powdere” from the Middle English St. Erkenwald)

It’s the end of the semester: classes to conclude! meetings to attend! papers to grade! exams to compose! deadlines to miss! All of us academics are nearing exhaustion. Agreed! Agreed! And article to proof! And write! And grants to write! But lord knows it’s not as bad as adjuncting. Lord knows it’s not bad at all. Yesterday one of my students observed that “everyone thinks everyone in the Middle Ages was dirty and stupid, but you make it seem like they were just like us.” My response: “Yeah…stupid.” Thankfully she got the (perhaps ill-advised) joke, and I hope she gets what drove it: another attempt to drive out any sense of temporal superiority or, for that matter, nostalgia. Strangely enough, her comment came after a class on Sir Gowther, in which I went after the familiar strange mixture of titillation and sanctimoniousness in its opening stanzas. It starts:

God, that art of myghtis most, Fader and Sone and Holy Gost, That bought man on Rode so dere, Shilde us from the fowle fende, That is about mannys sowle to shende All tymes of the yere!

I observed that the lines looks like any of the usual invocations for a Middle English narrative (cf The Avowyng of Arthur and Emaré), but they’re not in fact, at least not yet, calling down a blessing on its audience. Rather they throw up a barrier against demonic forces, whose ability to “shende” the human soul is in fact a direct result of the infernal thoughts this very poem inspires. See Neil Cartlidge, at 136, which observes that the opening stanzas problematize

the whole business of tale-telling by implicitly raising the question of discursive responsibility: for if it is accepted that describing the Devil’s activities in any sense invites them [a point Cartlidge had already established], then the author’s decision to tell the story of Sir Gowther has to be morally questionable.

Not only morally questionable, then, but also an invitation to bodily injury or erotic sin: for the primary demonic threat in Gowther is not to the soul: “Sumtyme the fende hadde postee / For to dele with ladies free” or, as it explains later on, demons “sarvyd never of odyr thyng / But for to tempe wemen yon.” By casting its protective net over the readers, the prayer implicitly interpellates them, and its orator, the collective “us,” as women-about-to-have-sex-with-(or -be-raped-by-) demons. This is, after all, what demons do, at least within the confines of this poem. The flirtation of these newly hailed women with–or their perilous proximity to (so much depends on how we understand the demonic sex!)–infernal forces occurs simply because of the telling, and the desire for, this poem, which, according to the poem’s own self-promotion, is a “ferly” or “selcowgh” thing to hear. What have we, the listeners, gotten ourselves into? Something–what, I don’t quite know yet–much more than the “schame” from which the narrative voice hopes to be shielded. Something terrifying, wonderful, strange, uncanny, monstrous, something in which cupidity and fear and disavowed desire, surely the seed of shame, are inextricably intermingled. In the most straightforward reading, that shame (“As Cryst fro schame me schyld”) is the shame of relating the particular details of how demons, despite lacking bodies of their own, impregnate women. The shame here may also be the shame of lacking a proper explanation for the events of the poem: according to a scholarly consensus (see Aquinas (reply obj 6), who agrees with Augustine), demons do not impregnate women themselves, but rather artificially inseminate women with stolen semen, and thus “the person born is not the child of a demon, but of a man.” Because the demonchild Gowther, in other words, should not actually be a demonchild, the shame here is in part the shame of getting the doctrine wrong and then cheekily ascribing the (willfully mistaken!) notion to the misunderstood scholars (“Therof seyus clerkus, y wotte how”). Mostly, however, I think the shame is the shame of wanting to hear this story, despite or indeed because of its dangers, a story of women suffering macerated breasts, friars thrown off cliffs, parsons hung on hooks, nuns (at least in one of the manuscripts) raped and burned to death in their own convent, a story, that is, crowded with the grand guignol of hagiography.

And that’s the beginning of the introduction’s final stanza. Give us joy indeed, and give us, but not too much, protection from the shame of our own joy. Although Robert Mills’ Suspended Animation: Pain, Pleasure and Punishment in Medieval Culture is only on my shelf, not yet read, I felt certain enough to wind things up by linking the desire for Gowther and the hagiographic pendulation between imitatio and admiratio with the purportedly pious obsession in hagiography with mutilated erogenous zones: faces, breasts, skin, genitals, the beautiful naked bodies of men and women, boys and girls, virgins mostly, made to live out, and die for, fantasies badly veiled by sanctimoniousness. It’s this reading that led to the student remarking on the medievals being just like us. Of course I’ve just committed a post hoc ergo propter hoc fallacy, but I’d be lying if I said I didn’t want to believe that my student, and by extension all my students, found themselves implicated, caught up, in Gowther‘s pious titillation of torture. Gowther Recommended Bibliography

Uebel, Michael. “The Foreigner Within: The Subject of Abjection in Sir Gowther.” Meeting the Foreigner in the Middle Ages. Ed. Albrecht Classen. Routledge, 2002, 96-118.