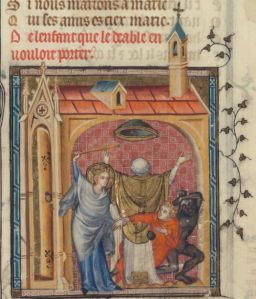 Last night, some friends threw a spooky holiday party, themed, as they once were, around ghost stories. Here’s my not fully successful story about a HAUNTED EXEMPLUM:

In Fredric Tubach’s Index Exemplorum, between Gestures, significance of and Ghost of woman above tomb, we find entry #2277, Ghost of dead child. Only two of Tubach’s 5400 entries begin with ghosts, only some .0037. To contextualize that for you: that’s the same percentage of people who were murdered in Baltimore in 2008; the same chance of a baby needing its own privately banked cord blood; the same, according to at least one facebook post, as an American baby being born with congenital HIV.
2 in 5400 is not a lot of ghosts.
Still, this one is relatively popular. Or it’s at least proliferative. The story, in Tubach’s summary — his spooky summary — goes like this: “The ghost of a dead child tries to tempt her mother to suicide until a lock of the dead child’s hair is burned.”
Tubach directs me to El libro des Exemplos, and, of course, Stith Thompson’s motif index, which lists the story three times, under entries for magic, the dead, and ogres, which strikes me as a really unpleasant way to describe a child, no matter how wicked it is. Maybe the child was just lonely?
The great Spanish golden book of exemplos, dating to the 15th century, isn’t available online anyway. But both the Motif Index of Mediaeval Spanish exempla and the Motif Index of Medieval Spanish Folk Narratives are, and both — SPOOKILY — direct me to slightly different sets of exempla, many edited in Fascist Spain, and none available online either.
It’s possible that the tale is eluding me.
The Spanish Folk Narratives collection, moreover, tells the story slightly differently, so it goes like this:
E446.2.1. Ghost laid by burning lock of hair. Devil appears disguised as woman’s dead son tells her to find holy relic (Virgin Mary’s golden hair) and to climb a very tall tree for special branches. Her confessor tells her to bum hair. Ghost disappears.
Well! That’s strange. Whose hair is she burning anyhow, and is it her son or the devil?
Let’s assume for now that the tale goes like this: the devil pretends to be the mother’s dead son, lonely or suffering in the afterlife. He can be satisfied if, and only if, his mother dies climbing a tree to retrieve the virgin mary’s hair, somehow left in the tree among some special hairy branches. You’ve probably seen the like if you’ve spent any time in Spain. The mother succeeds, sort of: she gets the hair, snaps off some branches, but still doesn’t manage to kill herself. Maybe, holding her breath, screwing up her face, she leaps out of the tree and is caught, mid plummet, on a branch, dangling helplessly, clutching a hank of demon hair, while he son floats near her, Salem’s Lot style, deriding his mother, and he did in life, for her ineptitude at suicide.
She doesn’t do it exceptionally well.1
Along comes the priest, fetches a ladder, and rescues the unwilling mother. He has her burn the hair, but she still looks longingly at the tree for years, till death finally comes for her more naturally. She’s embarrassed and sad all at once, and would take the devil back, so long as he came in the form of her son, so long as he gave her something to do.
That’s how I think the story goes, anyway. I like to think the story changes every time a folklorist studies it, that it moves from manuscript to manuscript, changing its details slightly. The reason I can’t find it, then, isn’t because of bad internet archives; it’s because it doesn’t want to be found.

(note: this tale will last only so long as I don’t get my hands on this)

1. Like you need this. You were in high school too once, I bet.↩