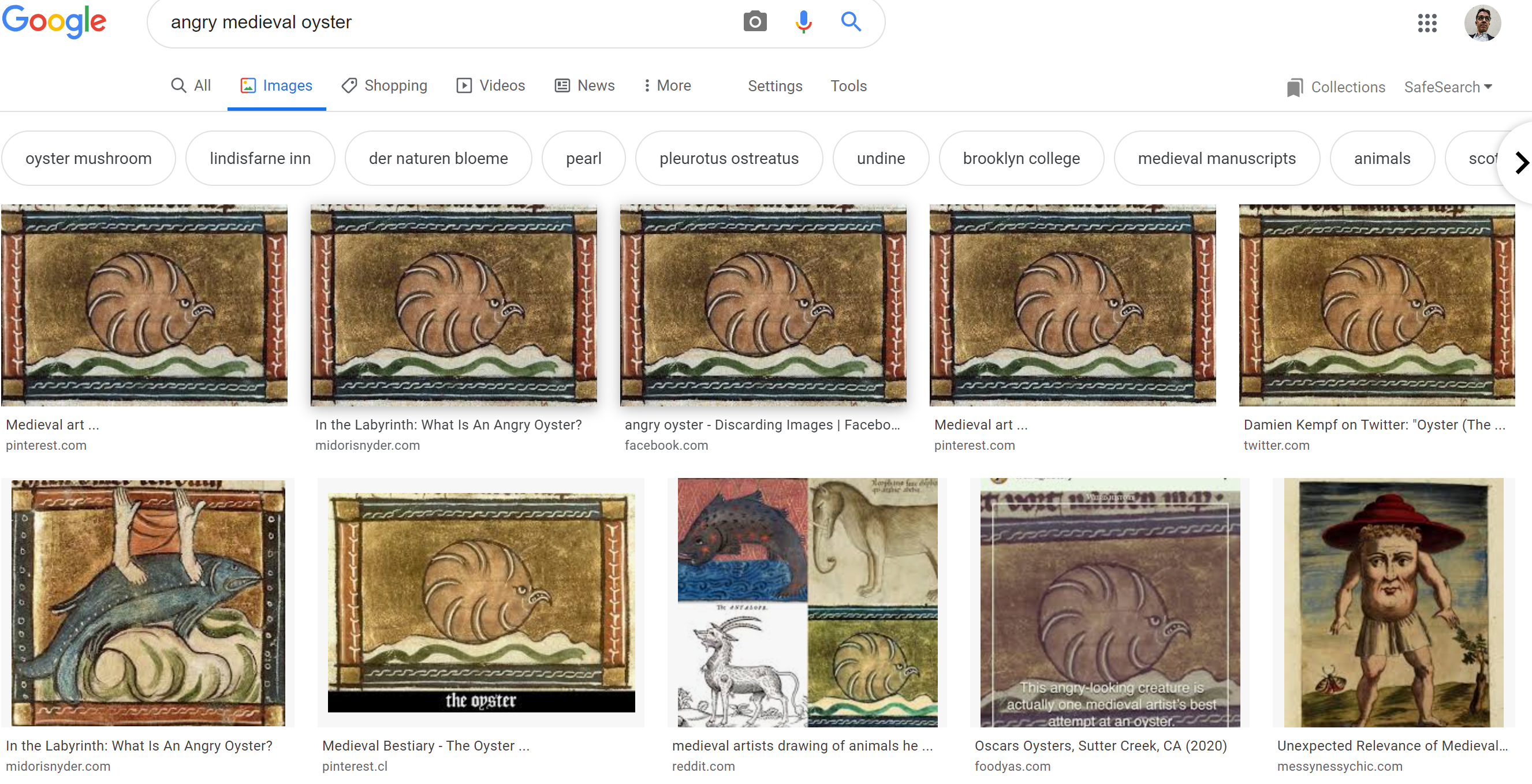 Because of my work on medieval oysters, people have sent me, for years now, the same image of an angry medieval oyster. There it is, above. This morning, I decided to put this oyster to bed at last. Turns out, it’s not an oyster. It’s a Fan Mussel. And I have no idea why it has that look on its….face?

How did I figure this out?

The manuscript the oyster comes from is of Jacob van Maerlant’s Der naturen bloeme. People who aren’t medievalists or scholars who just run across the image on Pinterest often tend to assume that the image is by Jacob van Maerlant. No: he’s the poet, whose Der naturen bloeme is a Dutch versified adaptation of Thomas of Cantimpré’s Liber de natura rerum, a natural history encyclopedia in Latin prose. Furthermore, as van Maerlant died c. 1300, and this particular manuscript, Koninklijke Bibliotheek KA 16, dates to the mid 14th century, he of course couldn’t be its illustrator.

That’s the “oyster” in context. If you squint, you can see that it’s not identified with a word that’s anything like the Dutch for “oyster.” The word is, instead, “Perna.” 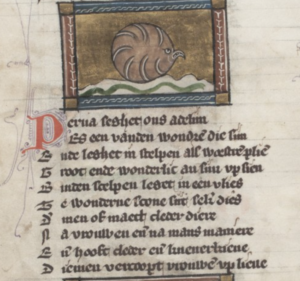 If you have trouble reading that, you can consult this online edition:

Now, I don’t read Dutch myself, but I do have some German, and it’s obvious that we have wonder this and wonder that, that they lie in their shells, and that there’s something about women (vrouwen, that is, Frauen). And I just don’t know what “adelijn” is at all. At least, for a while, I didn’t.

It’s a bit easier to understand if you have Latin and can track down Jakob’s source. Here’s Thomas of Cantimpré’s entry from one of the many surviving manuscripts of his Liber de natura rerum, easy enough to track down because each section of the Thomas — in this case, the section on Sea Monsters — is in alphabetical order, and each entry has a big decorative initial:

I was able to track down the modern Latin edition simply by deciphering enough of the above to google it. My keywords were “et ornatum” and “ac mulierum.” And that led me to this (and thanks Gregory Hays for scans of the necessary pages of the Thomas and the [trumpet flourish] Aldhelm):

The Thomas is also available in sources like these.

Now, the key phrase here is “nascitur ostrearum more” — it’s born in the manner of oysters: that is, it’s not an oyster! It’s something like an oyster. It’s also reputed to be very big, also not like an oyster. And this yellowish, very red substance (fulvo nimis ac rutilo) used to adorn the clothing of men and women? Also not very much like an oyster. 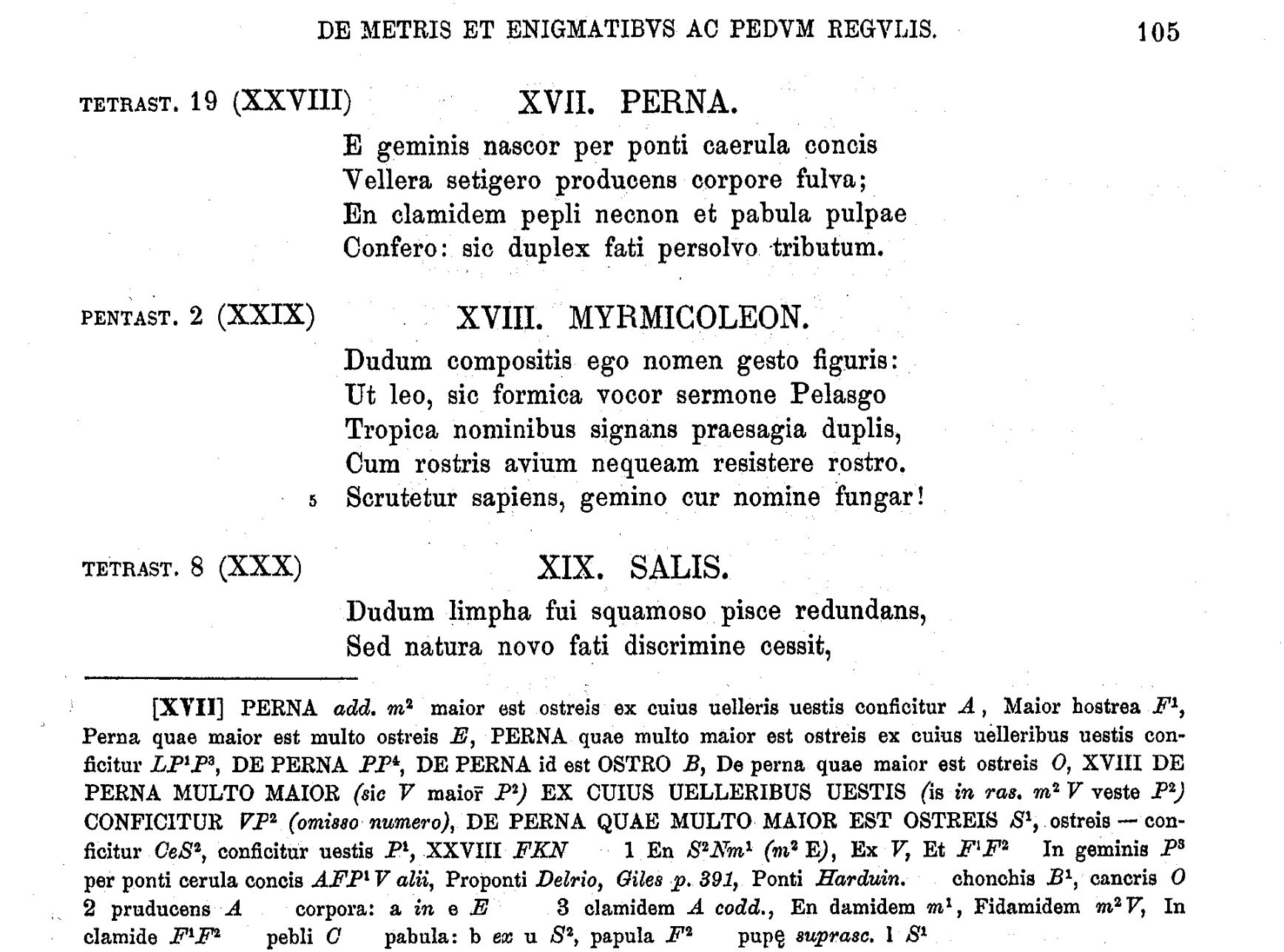 Where’s Thomas getting this? Well, Adelinus = Aldhelm, Abbot of Malmesbury, who died in 709. If you’ve watched The Last Kingdom, he looks like this. His riddle 17 provided Thomas with his material, and thanks Thomas for being good enough to cite your sources!

Here’s what A. M. Juster says in his translation of the Aldhelm:

The title perna (“ham”) puns on the ham-shaped pinna nobilis, a common bivalve mollusk of the Mediterranean which grows silky threads with which many ancient cultures wove highly prized cloth. See Cameron supra at 120; cf. Laufer, “The Story of the Pinna and the Syrian Lamb,” Volume 28 No. 128 Journal of American Folklore (1915) at 103‒22. The answer to Symphosius Aenigmata 85 is also perna, but without the pun.

And here’s a riddle from Symphosius (the pen name of a North African poet who died sometime in the fourth century):

Translations must be accessed through the Google Cache:

Peck:
Of noble race I come, great Cato’s line,
I have one sister, more are reckoned mine,
From smoke my looks are caught, I taste of brine.

Ohl:
A noble lineage have I, great Cato’s line. One sister is mine, though more are thought to be so. Of smoke is my complexion born, my good taste of the sea.

Ultimately, that so-called medieval “angry oyster” is the Pinna Nobilis, or Fan Mussel. Or, ultimately, it’s a ham.

So there you go. Go and sin no more.